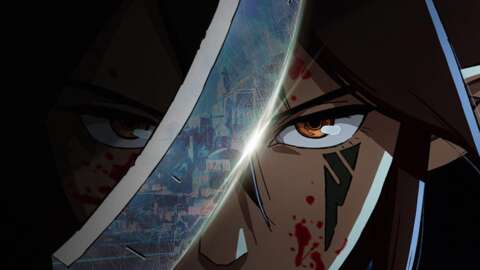 As part of Netflix Geeked Week, the streaming giant released a teaser trailer for Dragon Age: Absolution, a newly announced animated series based on the video game franchise of the same name. The adaptation created in collaboration with BioWare will debut on Netflix this December.

For Netflix, Mairghread Scott (Magic: The Gathering TV series) serves as showrunner. Red Dog Culture House (The Witcher: Nightmare Of The Wolf) produces the series. A logline is as follows: “Dragon Age: Absolution is set in Tevinter and features an ensemble of new characters inspired by Dragon Age lore, including elves, mages, knights, Qunari, Red Templars, demons, and other special surprises.” Further details will be announced soon. Check out the new clip below.

Dragon Age: Absolution is one of many new video game TV shows and movies in the works. In an ever-growing pipeline of video-game adaptations, TV series based on Sony PlayStation properties God of War and Horizon were announced as ramping up production most recently in late May. Sony said in May 2021 that it had 10 TV shows/movies based on its games in the works, including the upcoming Ghost of Tsushima movie from John Wick’s Chad Stahelski, HBO’s The Last of Us series, and the Twisted Metal show from the writers of the Deadpool movies.

Make sure to keep up to date with the rest of our Geeked Week content.

The products discussed here were independently chosen by our editors.
GameSpot may get a share of the revenue if you buy anything featured on our site.