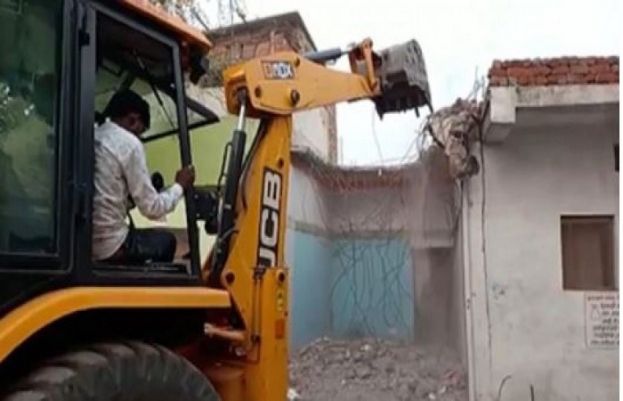 Civic authorities in Uttar Pradesh’s Prayagraj started demolishing the house of Welfare Party of India activist Javed Mohammed on Sunday afternoon, claiming that it was an illegal construction.

Earlier on Sunday, the Prayagraj Development Authority had asked Mohammed’s family to vacate the house by 11 am. The authority claimed that it had given a show cause notice to Mohammed, on May 10, asking him to appear for a hearing before it on May 24. However, he did not comply.

Somaiya Fatima, the younger daughter of Mohammad, told Scroll.in that the family had not been served any notice about the alleged illegality of their house. Mohammad’s lawyer also questioned the legality of the demolition claiming that it belonged to his wife, but the order did not mention her name.

On Saturday, the police had arrested Mohammad for allegedly hatching a conspiracy to carry out violent protests against the disparaging remarks made by two Bharatiya Janata Party spokespersons about Prophet Muhammad.

Somaiya Fatima told Scroll.in that she and her mother had also been detained late on Saturday. They were released on Sunday morning.

While there are no provisions under Indian law to demolish the home of anyone accused of a crime, this pattern has been regularly observed across Bharatiya Janata Party-ruled states.

‘No notice was served earlier’

Somaiya Fatima told Scroll.in that the authorities had not issued any notice earlier about the house being illegal.

“This is the first notice that we got last night (Saturday),” she said. “No one has even spoken to us about this before a day ago. If our property was truly illegal, then why did they not come and give us these notices early. This is an incredibly hard time for us.”

Somaiya Fatima said that she and her mother, 50-year-old Parveen Fatima, were detained by the Prayagraj Police around 12.30 am on Sunday and taken to the city’s Civil Lines female police station.

“They only told us that they wanted to speak to us about something and then they will let us go,” she told Scroll.in. “They started with asking us strange questions like what are the kind of conversations we have at home and what are the kind of posts we share. They were trying to get something controversial out of us, but none of that is even true. We only speak the truth.”

Somaiya Fatima said that while women police officers tried to get them to talk, a male officer abused her mother and said that force should be used to make them “spill the truth”.

“They [The police] videographed us, our relatives, their home and asked us to not leave this place,” Somaiya Fatima said. She added that the family still does not know about the whereabouts of her father.

Petition filed against the demolition

Kamal Krishna Roy Roy, a lawyer of the Mohammad family, told Scroll.in that a petition has been filed in the Allahabad High Court challenging the demolition.

In a letter to the chief justice, Roy and other lawyers have argued that the house was registered under the name of Parveen Fatima, the wife of Javed Mohammed. Documents from the Prayagraj civic authorities showed Fatima’s name on them.

“The house was a gift from her [Fatima] father,” Roy told Scroll.in. “Under Muslim Personal Law when a woman gets a property…It does not automatically belong to her husband. “The notice that the government has issued is against Javed Mohammad, but the property does not belong to him.”

“Any attempt by the District and Police Administration and the Development Authority to demolish that house will be against the basic principle of law and a grave injustice to the wife and children of Javed Mohammad,” the letter to the chief justice stated.

The letter added that the Mohammad family had received no show cause notice as has been mentioned in the demolition orders.

Roy said he expected an early hearing of the petition.